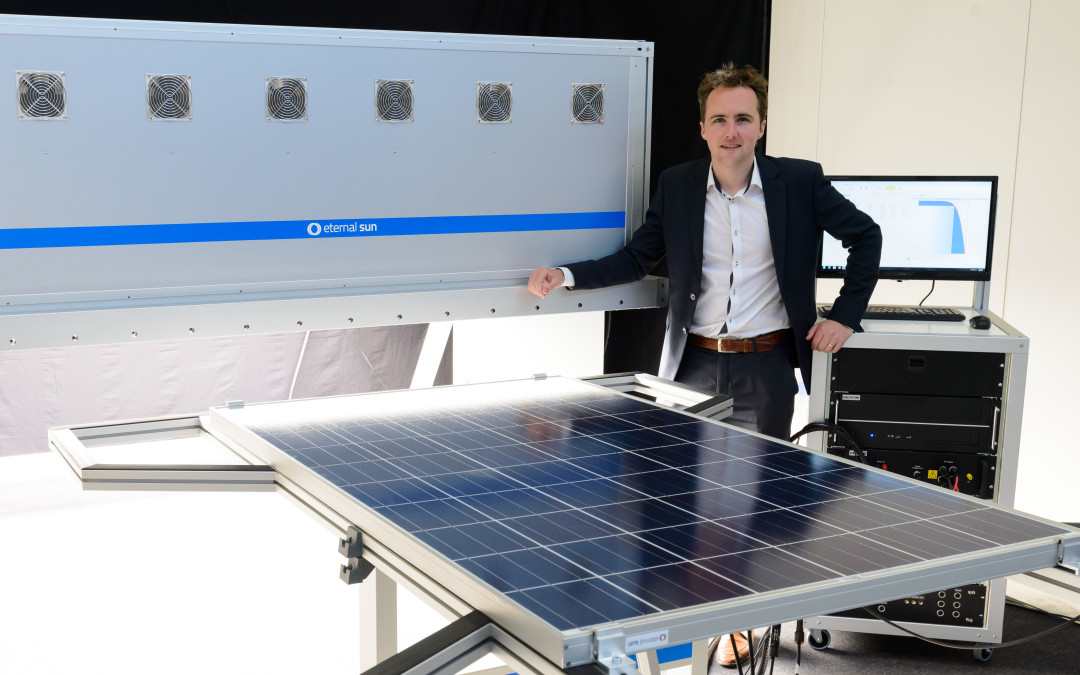 Posted at 16:00h in News by Niels van Loon
Share

Eternal Sun recently sold the combined climate and solar simulator to a renowned research institute and to a top 10 module manufacturer. The start-up company based in The Hague (NL) is taking of with the testing machine developed by Solliance. ‘We really developed this device together with Solliance,’ says marketing manager Robert Jan of Eternal Sun. ‘It’s a textbook example of successful scientific-industrial cooperation.’

It all started at TU Delft. There, Mirjam Theelen of Solliance was conducting doctoral research into the stability of CIGS solar cells, and how they perform if you expose them to sunlight, heat and moisture over an extended period.  The goal was to develop a reliable CIGS panel that is flexible, has a good energy yield, and can be produced at low cost.

What motivates customers and employees conducting joint research into the latest generation of solar technology? In a series of interviews, Solliance will reveal the company behind the product or research. An interview with Robert Jan van Vugt of Eternal Sun.

For her research, which she conducted together with colleague Henk Steijvers, she needed a device that could test the lifespan of CIGS cells for extended periods, and under real-world conditions. She wanted to expose the material to all kinds of conditions and measure the effects. To that end, she needed not only good measuring equipment and a climatic chamber, but also an ‘artificial sun’.

Founder and CTO Stefan Roest of Eternal Sun – at the time still a student at TU Delft – just happened to be building such an artificial sun at the time. Mirjam was immediately impressed by the simulator, which approximates real sunlight as closely as possible without the use of expensive Xenon lights. It was important for her research that the light source invented by Stefan could be left switched on for 1,000 consecutive hours, and it needed to have a large surface area.

She combined Stefan’s prototype with a climate chamber from Hielkema Testequipment in Uden and measuring equipment supplied by ReRa Solutions in Nijmegen. And so, a unique testing device was born, which can simultaneously measure how well cells are performing as well as how long they can do so.

‘Mirjam was our very first customer and Solliance our launch customer’, says Robert Jan. The solar simulator that Stefan had developed could be sold immediately. Meanwhile, Eternal Sun has acquired the rights to the climate and solar simulator developed at Solliance and has launched it on the market.

Things have been gone well for the company since its formation in 2011. After Mirjam, new customers soon followed, especially in the research world. Early last year, The Hague company took over Spire Solar, which also supplies solar simulators, but of another type. ‘The acquisition gave us access to a new group of customers: the manufacturers of solar panels,’ says Robert Jan.

Robert Jan and his colleagues are sometimes still amazed at the astonishing growth the company has experienced. However, their drive to make energy supply more sustainable has remained unchanged. ‘We chose Eternal Sun because we want to develop innovative products within a small-scale company with green ambitions.’

No one is better at explaining how the climate and solar simulator works in research practice than Mirjam. And at such conferences, the people from Eternal Sun explain how the company develops custom-made testing equipment together with customers. ‘This is exactly the type of collaboration we were looking for,’ says Robert Jan.

What’s more, Solliance and Eternal Sun also benefit from each other’s contacts. ‘They are always keen to introduce us to their network,’ says Robert Jan. In turn, Eternal Sun sometimes opens doors for Mirjam and her colleagues.

Eternal Sun regularly takes customers to visit the Solliance Building, so they can see how the testing device is being used. According to Robert Jan, clients are always impressed at how different research institutes manage to work together in a single location in Eindhoven. ‘It isn’t every day that different parties are able to benefit from each other’s knowledge in this way.’

When asked about the future of thin film, he said: ‘You’ll never be able to compete with silicon on price. I don’t think, as people always thought it would, thin film will ever really become a cheaper alternative to ‘traditional’ solar panels.’  However, he does see a future for flexible panels based on thin-film technology. ‘I’m certain there is a market for solar foils that can be integrated into other products.”