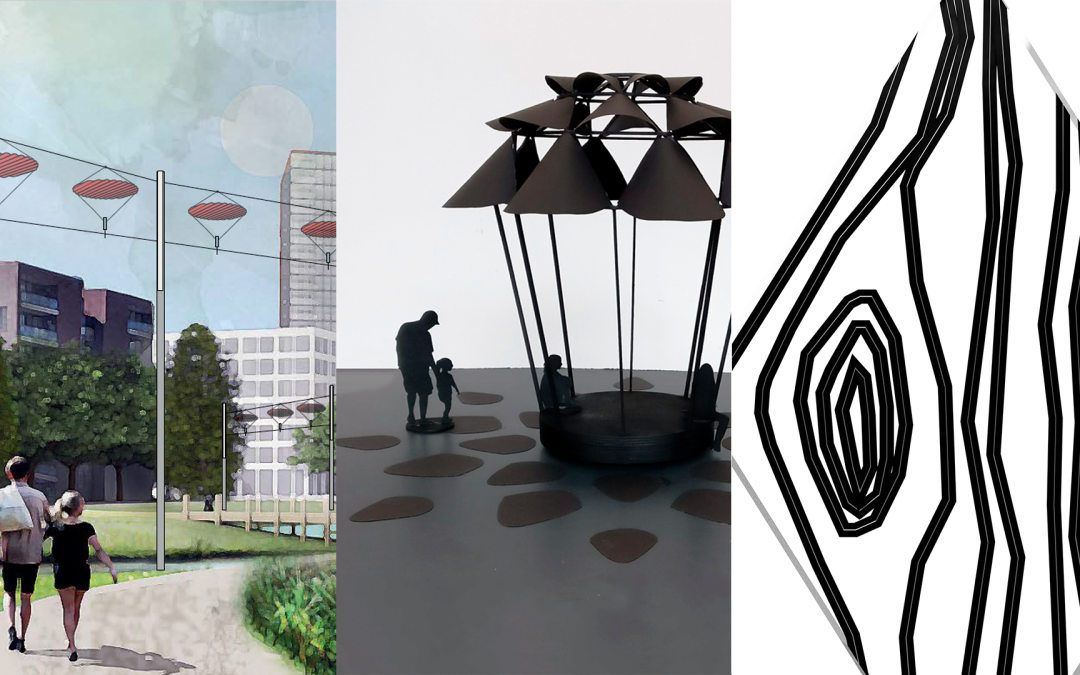 Posted at 21:21h in News by Niels van Loon
Share

Three design studios devised how to apply thin-film solar panels in the future park in the Emmasingel kwadrant in Eindhoven. Solliance made a flexible solar panel available and provided expert advice. On 11 October, the candidates – Studio Toer, VANTOT and Studio Bas Sala – have pitched their draft designs. The winner of the Solar Square Design Challenge will be announced during Dutch Design Week.

Black, smooth, technical: Bas Sala didn’t like the appearance of traditional solar panels. This is why his Rotterdam design agency devised a more appealing ‘packaging’ for solar cells, in particular those Solliance is doing research into. ‘This way, we will no longer need to hide solar panels.’

‘If you want to apply this technology more widely – which you do – you will need a form that can be integrated into the environment’, he continues. Studio Bas Sala invented an element with a woody structure. This new application of thin-film solar cells has been further elaborated in a design for the park.

The elements can be used as paving, cladding or, for example, in street furniture. They generate their own energy, are luminous and are interconnected and controlled via the internet. By influencing colour and light intensity at a distance, an atmosphere can be created that mirrors what’s happening in the city at that moment.

Bas calls the draft design ‘Smart Gender’, which is a reference to a filled-in stream that pops up here and there in the centre of Eindhoven. As the Gender meanders through the park, the elements invented by Studio Bas Sala will form a new stream through the park.

He is excited about the flexible solar panels that Solliance made available. ‘We were familiar with a variant that was less foldable and thicker. These are much better.’ He is also very pleased about the collaboration with the research institute. ‘The people I met there are very open-minded. This allowed us to get things done together very quickly.’

The lighting modules that Studio VANTOT designed for the park are reminiscent of Chinese lanterns. ‘We asked ourselves the question: What can we do with this material?’, Esther Jongsma says about Solliance’s flexible solar panel. As it turns out: a lot! ‘We glued it to aluminium corrugated sheets, cut it into round pieces and then folded and perforated it. And yes, we’re sure it works.’

The top of the solar panel catches sunlight, while the aluminium bottom reflects the light of the LED lamps hanging underneath from two thin steel wires. Studio VANTOT has somehow managed to transform this rather cold looking material into something friendly. ‘Accessible’, is what Esther calls it.

The modules – the lanterns – can be used in all kinds of ways. ‘Our concept is very scalable.’ Hung from steel wires along the park’s sight lines, they can act as street lights. ‘It would be even better if the modules were to move along the wires to the point with the most sun’,says Esther. They can also be suspended from a steel wire net so that they form a kind of roof.

Up until now, VANTOT’s light designers worked mainly with LEDs. Esther is very enthusiastic about the flexible solar panels. ‘This offers many more possibilities than a simple straight plate.

Not only the chance to work with this special material appealed to Esther in this challenge. She enjoyed working together with various parties, and even better, on a project in a public space, in her own city. ‘Visiting Solliance was also a very interesting experience.’

The design of Studio Toer is a nod to the nostalgic bandstands you see on some Brabant village squares. The thin-film solar panels are incorporated into the curved roof. ‘It’s impossible to do this with traditional panels’, says Wouter Widdershoven of Studio Toer from Eindhoven.

‘We need to move towards an energy transition.’ For Wouter, that is certain. As a result, energy production is becoming less and less something that takes place hidden from our view, in out-of-town power stations. ‘You can’t hide solar panels, so we will have to accept them.’

With the bandstand, Studio Toer wants to contribute to this acceptance, by literally allowing people to experience the power of solar energy. When the sun is shining, the bandstand will start to turn very slowly. ‘We wanted to make the process in the solar cells visible. Not by explaining it, but by making people feel it.’

Studio Toer has used solar cells in a design before. ‘Until recently, our thinking revolved around thin, fragile plates. We didn’t know thin film even existed.’ It did take a bit of puzzling to figure out how they could apply the flexible panel. But once they knew what they could and couldn’t do, the possibilities turned out to be endless.

In the draft design, the bandstand is given a roof made of steel or plastic laminated with thin film. ‘It become a slender, curved structure’, explains Wouter. The idea is that people might sit on the turntable while eating their lunch in the park during their break, for example. And Wouter’s also excited that the challenge is taking place in his home town: ‘The fact that this is a local competition makes it extra fun.’

The results of the Solar Square Design Challenge wil be announced at 13:00 on Friday 27 October, at the World Design Event during the Ditch Design Week. This will take place at the Stadhuis in Eindhoven, where the designs for the Emmasingel kwadrant will be in an exhibition.