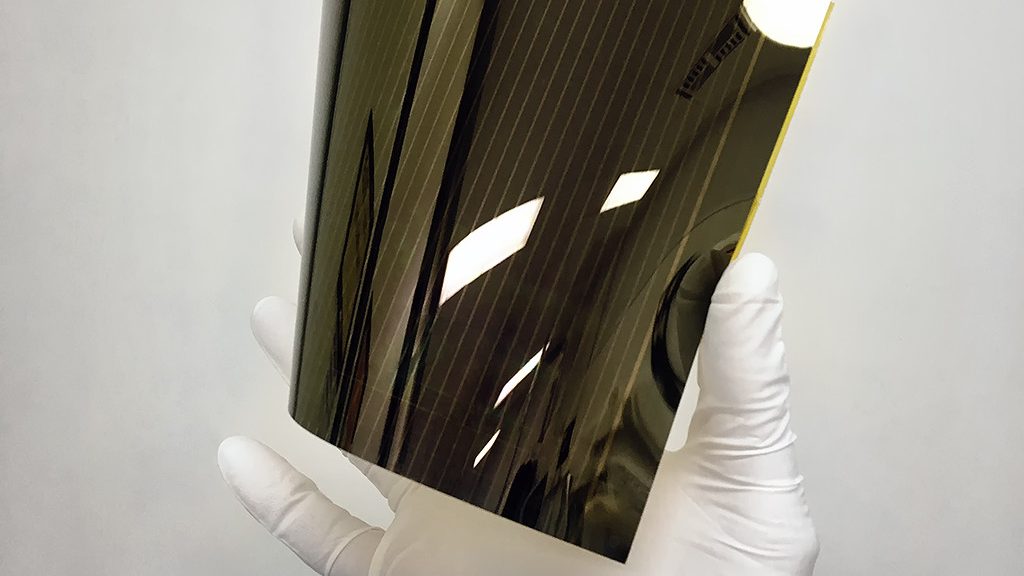 Perovskites, are perhaps, the most exciting solar energy technology to appear in recent years. They promise high efficiency from relatively simple production processes, bringing the potential for cheaper, greener energy. Moreover, they can be processed into thin, lightweight and potentially semi-transparent modules for integration into windows or curved construction elements.

Solliance and its partners are helping to speed the market introduction of this technology by developing scalable, industrial processes for fabricating large-area modules. The goal is to enable seamless integration in a broad variety of new energy harvesting building blocks for infrastructure, building and vehicle construction and assembly.

In March this year, Solliance demonstrated R2R processes for both the electron transport and perovskite layers of the cells that make up such modules. Now, by further optimizing and re-validating these processes on its dual R2R coating line, Solliance has improved performance at both the cell and module level.

After selecting two foil zones of each about 10 meters in length with a visual good perovskite quality, but with different R2R processing settings, 20 individual 0.1 cm2 solar cells were made in each zone. In one zone the maximum stabilized efficiency reached 13.5% (measured under maximum power point tracking conditions over 5 minutes) and in the second zone a maximum of 12.5% was reached. The average stabilized cell efficiency in the best performing zone was about 1% higher than the previously reported run in March 2017.

All processing steps used low-cost materials and scalable processes at temperatures below 120 °C. This highlights the potential for cost-effective, high-volume production of perovskite solar cells.

“These results show that the developed R2R process is very reproducible over different runs in time, which is very important for future reliable manufacturability“, explains Pim Groen, Professor of SMART materials at the Technical University of Delft and Program Manager at Holst Centre/Solliance.

Richard Caldwell, Managing Director of Greatcell Solar remarked: “The metals project at Solliance is hitting its targets. The successful translation of this PSC technology from the laboratory to the factory will open up massive commercial opportunities. A particularly pleasing feature of the current progress is the possibility to solar enable commercial and industrial roofing using low-cost R2R processes, thus opening up a whole new space to capture the Sun’s energy, all day, every day.”

Perovskites have delivered incredible efficiencies in lab-scale photovoltaic cells. The challenge now is to upscale perovskite cells to larger modules with high efficiency and long lifetime at low cost. This demonstration of scalable roll-to-roll and sheet-to-sheet processes for the deposition of active layers and cell interconnections shows Solliance is excellently placed to realize this upscaling. We are confident of quickly boosting efficiencies above 15% for modules up to 30×30 cm2. And our research shows that optimizing materials and processes is steadily improving the stability of perovskite devices under real life operational conditions,” explains Ronn Andriessen, Program Director at Solliance.

Solliance is a cross-border Dutch-Flemish-German thin-film photovoltaics research initiative. Its research on the development and applications of perovskite-based PV modules is carried out in conjunction with industrial partners Greatcell Solar Limited, Solartek and Panasonic.

Solliance partners are: ECN, imec, TNO, Holst Centre, TU/e, Forschungszentrum Jülich, University Hasselt and Delft University of Technology. Solliance offers participation in its research programs and opens up its lab facilities to new entrants, either from industry or in research. On the basis of clear Intellectual Property (IP) agreements, each industrial partner can participate in this research effort, or alternatively, hire equipment and experts to further develop its own technology.

Energy research Centre of the Netherlands (ECN) is the largest energy research institute in the Netherlands. ECN develops new technology and conducts pioneering research in various ways into innovative solutions to facilitate the transition to sustainable energy management. With around 500 members of staff, we are active in projects both at domestically and abroad, in joint efforts with the industry, government authorities and research institutes. We do this from our locations in Petten, Amsterdam and Eindhoven. ECN’s research has a major influence on day-to-day life. In this, we perform an important role for the society of today and the future.

Holst Centre is an independent R&D center that develops technologies for wireless autonomous sensor technologies and for flexible electronics, in an open innovation setting and in dedicated research trajectories. A key feature of Holst Centre is its partnership model with industry and academia based around shared roadmaps and programs. It is this kind of cross-fertilization that enables Holst Centre to tune its scientific strategy to industrial needs.

Holst Centre was set up in 2005 by imec (Flanders, Belgium) and TNO (The Netherlands) and is supported by local, regional and national governments. It is named after Gilles Holst, a Dutch pioneer in Research and Development and first director of Philips Research.

Located on High Tech Campus Eindhoven, Holst Centre benefits from, and contributes to, the state-of-the-art on-site facilities. Holst Centre has over 200 employees from some 28 nations and a commitment from over 40 industrial partners.

Imec is the world-leading research and innovation hub in nano-electronics, energy and digital technologies. The combination of our widely acclaimed leadership in microchip technology and profound software and ICT expertise is what makes us unique. By leveraging our world-class infrastructure and local and global ecosystem of partners across a multitude of industries, we create groundbreaking innovation in application domains such as healthcare, smart cities and mobility, logistics and manufacturing, and energy.

Imec is also a partner in EnergyVille (www.energyville.be), an association of the Flemish research centers KU Leuven, VITO, imec and UHasselt in the field of sustainable energy and intelligent energy systems.

As a trusted partner for companies, start-ups and universities we bring together close to 3,500 brilliant minds from over 70 nationalities. Imec is headquartered in Leuven, Belgium and also has distributed R&D groups at a number of Flemish universities, in the Netherlands, Taiwan, USA, China, and offices in India and Japan. In 2015, imec’s revenue (P&L) totaled 415 million euro and of iMinds which is integrated in imec as of September 21, 2016 52 million euro. Further information on imec can be found at www.imec.be

TNO is an independent Dutch Organization for applied scientific research, founded by law in 1932 to enable business and government to apply knowledge. TNO connects people and knowledge to create innovations that boost the competitive strength of industry and the well-being of society in a sustainable way. This is our mission and it is what drives us, the over 2,600 professionals at TNO, in our work every day. We work in collaboration with partners and focus on five transitions that we have identified together with our stakeholders: (1) Industry: from economic stagnation to growth in high-technology industry, (2) Healthy Living: from illness and treatment to health and behavior, (3) Defense, Safety & Security: from a wide range of threats to controllable risks, (4) Urbanization: from urbanization bottlenecks to urban vitality and (5) Energy: from conventional sources to sustainable energy systems.

Greatcell Solar is a global leader in the development and commercialization of Perovskite Solar Cell (PSC) technology – 3rd Generation photovoltaic technology that can be applied to glass, metal, polymers or cement. Dyesol manufactures and supplies high performance materials and is focused on the successful commercialization of PSC photovoltaics. It is a publicly listed company: Australian Securities Exchange ASX (DYE) and German Open Market (D5I).

Solartek Ltd. is a company registered in Russian Federation and located at Troitsk, Moscow. Solartek is an industrial partner of the Solliance. Six venture-building Nanotechnology Centers are investing Solartek as the joint company which playing the role of the business incubator and IP-box in photovoltaics. Solartek is creating different types of business – from small scale PV-FABs to BIPV-product companies. In the framework of Solliance perovskite-PV and CIGS-PV research activities Solartek is developing and supplying the samples of advanced PV materials (CNT-based conductive films) for conducting tests, aimed on cutting the production costs of PV products.