Posted at 11:36h in News by Niels van Loon
Share

ECN part of TNO and its partners in Solliance are working to combine perovskite thin film technology with crystalline silicon technology to create photovoltaic tandem modules. ECN part of TNO also develops bifacial silicon technology. By combining both approaches, the research partnership has now obtained a 30.2% equivalent efficiency for a bifacial tandem solar device. This is an important breakthrough because it combines a bi-facial design with state-of-the-art tandem technology to produce a 30+% equivalent light-to-electricity conversion efficiency, about one third better than state-of the art industrial solar cells which have an efficiency of around 22%.

Tandem for optimal utilisation of the light spectrum

ECN part of TNO and the Solliance partners have deep expertise on various solar cell technologies suitable for tandem applications, and are top of the league in developing tandem designs that are suitable for industrialisation. The high performance offered by tandem solar technology contributes to reducing the overall solar system costs and is an essential factor increasing the energy yield. Both these aspects will support the transition to a society using primarily renewable energy reducing the CO2 emission.

The combination of different types of solar cells in a tandem module enables a better power conversion efficiency than what is achievable with one cell type only. With one cell optimised for high energy photons in ultraviolet and visible light, and the other for low energy photons in infrared light, more electrical energy can be extracted from sunlight. In addition, the newly developed device collects the available light simultaneously from both sides of the solar module.

Common silicon solar cells have typical efficiencies in the range of 19 to 22%, with close to 25% for best-in-class technologies. The theoretical limit for silicon solar cells is 29.4%. To increase the efficiency beyond this limit, ECN part of TNO with Solliance Solar Research and its partners have combined two technologies to convert light into solar energy even more effectively. The team has achieved this by placing a newly developed perovskite solar cell on top of an industrial bifacial crystalline silicon solar cell and integrating these into a novel device architecture that harvests light from both sides: a bifacial tandem solar cell.

Bifacial solar modules are already commercially available in the Netherlands, for example the Solar Highways noise barrier project recently launched. In free standing applications, such as large solar power plants, reflected and diffuse light from surroundings, increase the annual electricity output typically by 10-30% using bifacial solar technology, compared to common solar modules. As the incident light on the front and the rear sides of the module is naturally varying during the day and from season to season, bifacial tandem devices need to be able to respond to this variability through their electronic design. The tandem device proposed here uses a four-terminal configuration, thus having separate circuits for the top and bottom cells that allow for dynamic fine-tuning and optimisation of the energy yield. 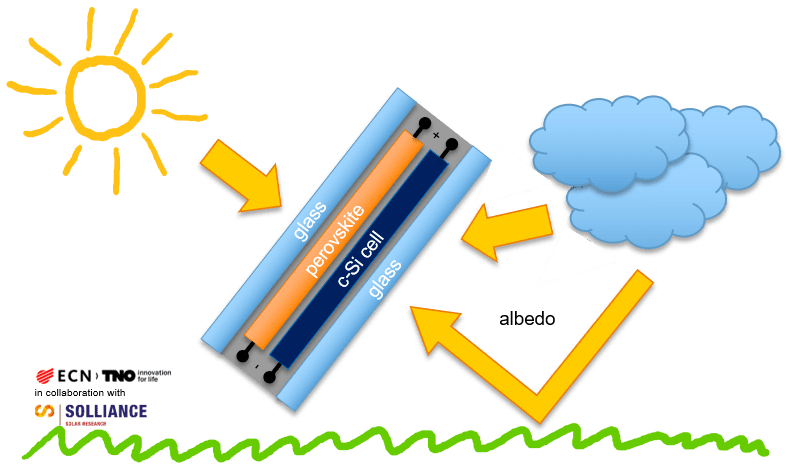 About the comparison of mono-facial and bifacial devices

The performance comparison of mono-facial and bifacial devices is not straightforward because many variables, such as the location and orientation of the solar module, have a significant impact on the energy yield. A practical approach is the concept of ‘bifacial-equivalent efficiency’, which is the efficiency of a mono-facial device required to generate the same (annual) amount of energy as the bifacial device, under the same operating conditions. The accepted practice to determine the equivalent efficiency for bifacial designs is measuring the solar cell from the front in standard test condition (STC) and adding another 20% of this illumination from the rear. By adopting this method, the bifacial equivalent tandem efficiency of our device is 30.2%, thus surpassing the limit of mono-facial silicon solar cells. The technology roadmap is to further bring this device to 35% equivalent efficiency in the next three to five years.

As a reference, the single silicon device alone in equivalent bifacial conditions, yields an efficiency of only 26%. “Reaching the 30% threshold is the first major milestone of this device architecture.” explains Gianluca Coletti – Program Manager Tandem Technology at ECN part of TNO. “Our next target is to work on the scalability, integration and reliability of this technology. We want to shorten the time to market and therefore we work together with our partners to make this technology ready for mass production.”

Partners that contributed to this work are: Choshu Industry Co., Forschungszentrum Jülich, imec, and Eindhoven University of Technology.