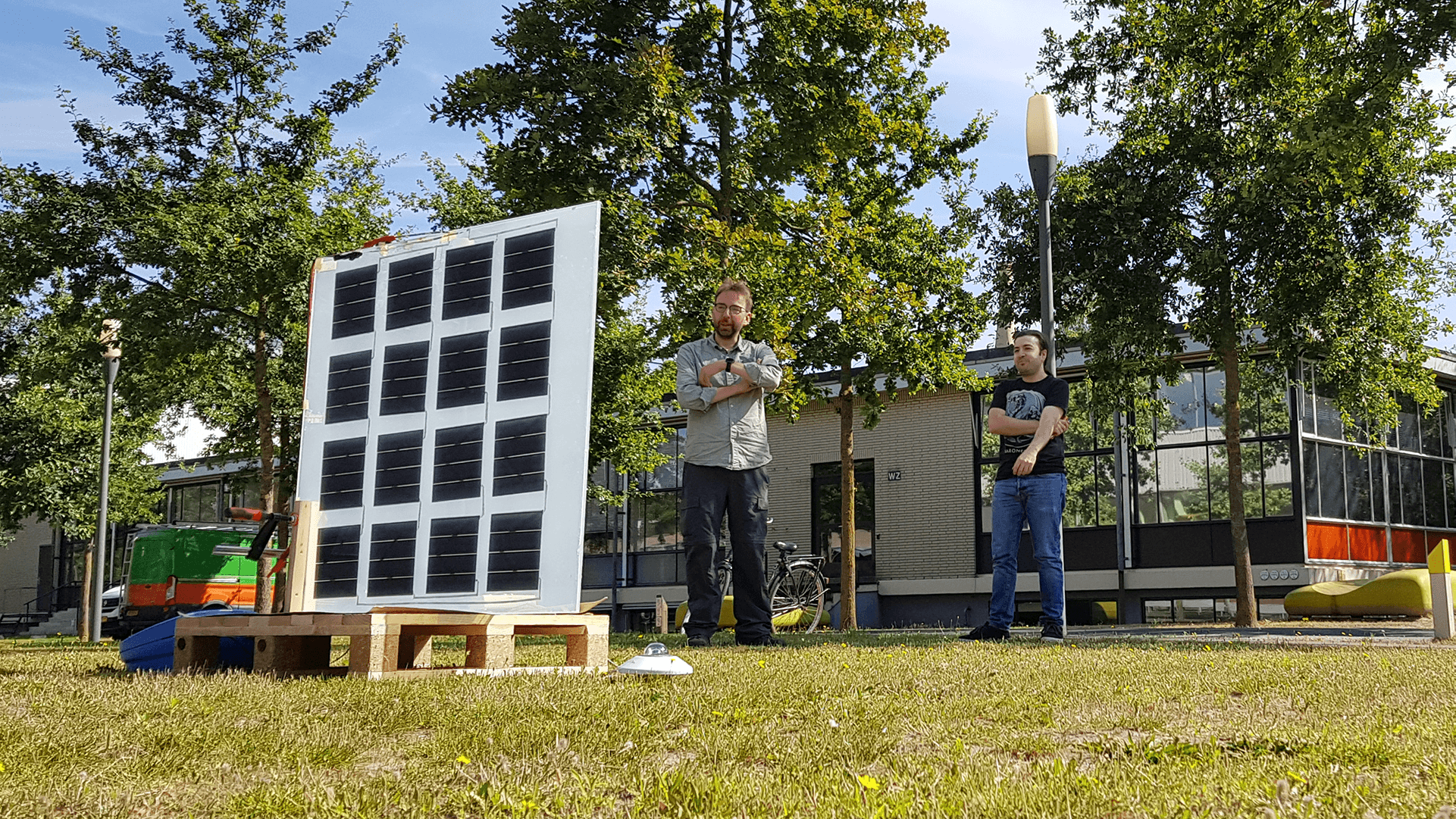 Posted at 12:04h in News by Niels van Loon
Share

In order to increase the energy yield from a noise barrier, we can make use of albedo. A large portion of the sunlight is, depending on their albedo, reflected by buildings, plants, roads and forests.  By developing double sided solar cells, we can harvest extra energy from this diffuse light. And last Friday, we tested the first double sided thin-film module that we made in the project Rolling Solar.

Earlier TNO, one of the leading partners in Solliance, already successfully tested bi-facial solar modules in the Solar Highways project. Together with Rijkswaterstaat and Heijmans an impressive test site was build next to the A50 highway near Oss. TNO developed prototype modules and is monitoring the yield since. The results show a significant increase in yield.

Bi-facial solar panels use the light that diffused by clouds and refection to objects. Although direct sunlight has the most radiation energy, diffuse light is also converted to electricity by photovoltaic solar panels. Using this ‘extra’ light can increase the yield of solar panels substantially. Of course this must fit in the application, (light weight) sound barriers are a good example. 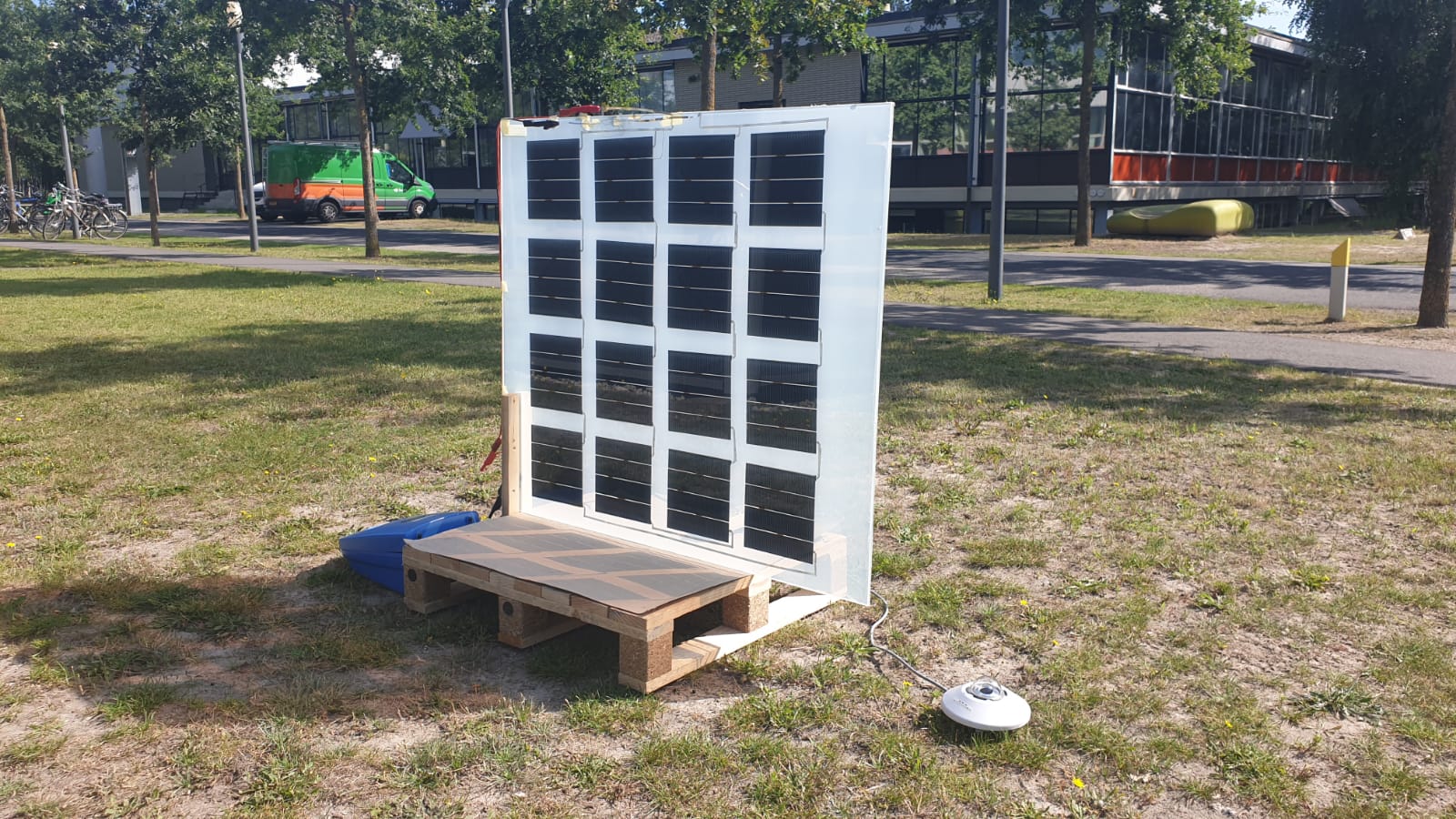 Next step: flexible and light-weight

Next step is a bi-facial and flexible solar panel, using thin-film solar technology. In the picture you see the first module made and being tested. Still far from ‘production’ but a functional proof of principle that can be used to check the production process, selected materials and electrical design. Of course the panel is also tested ‘indoors’ on the regular test equipment and the performance is simulated in software. Prototypes like this are used to validate these simulations.

In case of bi-facial solar modules like this one, simulation is important because is gives insights on the electrical behavior and variances due to small differences between the east facing panel and west facing panel and the behavior during mirroring (the switch from east to west at noon). In this test we tested this mirror-point and, although details should be studied well before making final statements, the combination of the simulations, indoor measurements and outdoor measurements show that it goes well in the desired direction.

Surface albedo is defined as the ratio of radiosity to the irradiance (flux per unit area) received by a surface.[1] The proportion reflected is not only determined by properties of the surface itself, but also by the spectral and angular distribution of solar radiation reaching the Earth’s surface.[2] These factors vary with atmospheric composition, geographic location and time (see position of the Sun). While bi-hemispherical reflectance is calculated for a single angle of incidence (i.e., for a given position of the Sun), albedo is the directional integration of reflectance over all solar angles in a given period. The temporal resolution may range from seconds (as obtained from flux measurements) to daily, monthly, or annual averages.

Unless given for a specific wavelength (spectral albedo), albedo refers to the entire spectrum of solar radiation.[3] Due to measurement constraints, it is often given for the spectrum in which most solar energy reaches the surface (between 0.3 and 3 μm). This spectrum includes visible light (0.4–0.7 μm), which explains why surfaces with a low albedo appear dark (e.g., trees absorb most radiation), whereas surfaces with a high albedo appear bright (e.g., snow reflects most radiation).

Albedo is an important concept in climatology, astronomy, and environmental management (e.g., as part of the Leadership in Energy and Environmental Design (LEED) program for sustainable rating of buildings). The average albedo of the Earth from the upper atmosphere, its planetary albedo, is 30–35% because of cloud cover, but widely varies locally across the surface because of different geological and environmental features.[4]

The term albedo was introduced into optics by Johann Heinrich Lambert in his 1760 work Photometria.